Better Manage the Influx of In-Commuters to Boulder

Boulder needs to better address the issue of the large number of regional car commuters coming into Boulder.

That large influx into Boulder from outlying areas – estimates range from 50,000 to 60,000 in-commuters each day – puts a heavy strain on Boulder. That strain includes:

Why is there a large number of in-commuters to Boulder?

Clearly, there is a jobs-housing imbalance in Boulder. For decades there has been a very rapid growth in jobs in the city, but due to the high cost of housing and relatively restrictive land use regulations in the city, there are far more jobs than houses in Boulder.

While many prefer to work in Boulder but live elsewhere, a very large and growing number of people in the Boulder region desire to live in Boulder but are unable to afford to pay the very high housing costs in Boulder. Many end up accepting a job in Boulder and finding more affordable housing in outlying areas.

However, this is a false economy.

Economist Todd Litman (http://www.vtpi.org/) has shown that “lower-cost” housing in outlying areas is a false economy. The several thousand dollars a household saves when a house is bought (or an apartment rented) in an outlying area is a savings that is outweighed by the costs associated with the household being obligated to make more trips by car (because destinations are relatively remote).

A household in an outlying area is thereby obligated to own, say, three cars instead of two, or two cars instead of one in order for household members to make a relatively large number of car trips each day. The cost of each car owned and operated by a household is now over $10,000 per year. By living closer to destinations, the household can reduce the number of cars it owns. Each car shed represents another $10,000 that can instead be directed to paying rent or mortgage in a mixed use, compact location.

Affordable housing is much more effectively provided by increasing the supply of compact, walkable, mixed-use and higher density housing. More affordability is also achieved by unbundling the price of parking from the price of housing. And by eliminating minimum parking requirements for new development.

How can Boulder reduce the number of in-commuters?

One of the most effective ways to increase the number of carpoolers is to use price signals. For carpooling, the most common signals are to increase the percentage of car spaces that are priced, to toll road lanes, and to create high-occupancy vehicle lanes (both priced parking and tolling are now used on US 36 between Denver and Boulder, but far more roads need such treatment).

Another needed example of price signals is the use of motorist user fees.

If possible, make such new taxes/fees revenue neutral by reducing or eliminating other fees/taxes when the new user fee is instituted. Because transportation impacts are lower in central  locations, town center properties should have lower transportation fees (such as impact fees) assessed by the City of Boulder.

To be viable and more heavily used, affordable and high-frequency train or bus service must be coupled with compact, mixed-use, higher density land use patterns – particularly near transit routes and in town centers. Currently, the Boulder region has very low density, single-use land use patterns that are largely unsuitable for frequent, quality, affordable transit service.

How Can Boulder Create a Better Jobs to Housing Balance?

Boulder needs a lot more in the way of compact, mixed-use, higher density housing – not just for greater affordability but also for a better jobs to housing balance. The demand for such housing is far higher than the supply of such housing in Boulder, which substantially contributes to the affordable housing crisis.

I do not believe that capping or reducing the number of jobs in Boulder is a desirable way to better achieve a jobs-to-housing balance.

A great many roads and intersections in Boulder are over-sized, largely due to the jobs to housing imbalance, but also due to the large subsidies that motorists have long enjoyed. Such large subsidies artificially induce a large number of car trips that would not have occurred had the subsidies not been in place. 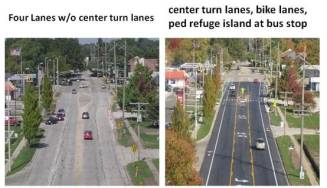 Like nearly all cities, Boulder’s land development regulations over the past several decades have required a large number of car parking spaces as a condition for development approval. This has created a massive over-supply of car parking in Boulder, which induces a large number of local and regional car trips (parking guru Donald Shoup calls the abundant free parking provided by such regulations a “fertility drug” for cars).

Boulder needs to reform its parking by converting minimum parking requirements to maximum requirements, price a larger percentage of parking that is free or underpriced today, replace existing surface parking with homes, retail, jobs, civic, and unbundle the price of parking from the price of housing (a powerful affordable housing tool)

When the Boulder region more fully implements the above recommendations, there will be a larger need (a larger demand) for more park-n-ride facilities in both outlying towns in the region and in the peripheral locations of Boulder. Parking reform, in particular, is a key way to make this happen.

The Need for Regional Cooperation

Clearly, in-commuting to Boulder is a regional problem that Boulder cannot solve on its own. Boulder needs to partner with outlying cities and counties (including unincorporated Boulder County) so that such entities outside of Boulder’s jurisdiction are also reforming their transportation and land use, as described above for Boulder, or at least supporting Boulder’s efforts to use such tools outside of Boulder (ie, actions by the state or unincorporated Boulder County).

Note that such regional cooperation tends to be quite time-consuming. And much of what I suggest as actions suggested for the City of Boulder can effectively start moving Boulder in a better direction unilaterally. Therefore, since such problems have urgency, regional cooperation should not delay actions that Boulder can institute now, on its own.

There are no quick, easy fixes for this problem. Conventional quick fixes, such as increasing the capacity of intersections or widening roads, only worsen the problem. Mostly, the problem is best addressed more incrementally with price signals and convenience signals that arise from the land use and transportation tools described above.